Any action star worth his salt has a trademark: Van Damme does the splits, Schwarzenegger cracks corny one-liners, Jackie Chan integrates prop comedy into his fighting and Tony Jaa has his elephants. If he asks “where are my elephants?!” it is far wiser to point in the direction of the nearest pachyderm and scram than to laugh in his face. This, his first film since becoming a Buddhist monk for a period, is a sequel to 2005’s Tom-Yum-Goong and a second serving of the spicy stuff that’s definitely an acquired taste.

Kham (Jaa) is wrongly accused of killing a powerful tycoon and elephant camp proprietor; the man’s nieces (Yanin Vismitananda and Teerada Kittisiriprasert) in hot pursuit and out for revenge. Kham is able to convince his friend Sergeant Mark (Petchtai Wongkamlao) of his innocence, and Mark informs him this may be connected to an impending terrorist attack. The target is a peace treaty signing between the rulers of East and West Katana. Crime lord and arms dealer Mr. L.C. (RZA) isn’t too keen on the prospect of the end of the civil war. He also runs a fight club in which the world’s most skilled martial artists are pitted against each other for his own entertainment, his henchman No. 2 (Marrese Crump) and femme fatale Twenty (Phongam) among them. He has his sights set on adding Kham to his “collection” – oh, and he’s captured Kham’s beloved elephant Khon as well. Bad move, Mr. L.C.

Fans of the films of old-school martial arts icons like Sonny Chiba and Cynthia Rothrock would probably go in for Tom Yum Goong 2. The film does have more than its share of extremely silly moments and a sprinkling of “so bad it’s good” charm that does seem very typical of the genre but that moviegoers will not find in Hollywood action flicks these days. The film does inspire thoughts to the effect of “were they aware this is silly? Was this intentional? It’s gotta be, right?” and maybe that’s your thing. 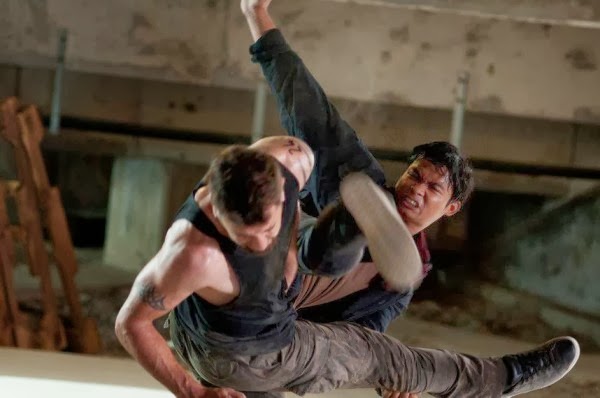 It goes without saying that in a film like this, it’s action first, plot (and logic of any kind) second. The flow of the story is completely interrupted by some lengthy action beats that don’t seem to have very much bearing on said story at all. An early sequence involves Kham getting surrounded by “moto-punks” on a rooftop (how the motorcycles got on the roof is the least of our concerns, really). Such bits have an over-choreographed “stunt show” feel to them and you could be forgiven for wondering “wait, so what does this have to do with the narrative again?” and similar thoughts will continue to creep in as the movie progresses.

Lest I start sounding like a killjoy, it is worth noting that the fights and stunts are very impressive. Audiences generally get a kick out of seeing displays of superlative physical prowess on screen, and Jaa delivers that in spades. Earlier in his career, he made a name for himself as a martial artist/actor who did not rely on wire work and computer-generated assistance. Well, there is a very noticeable use of sub-par CGI in places (we’re talking Asylum-level stuff), mostly to emphasize the “stuff flying out of the screen” gags (the film was shot in 3D; I saw the 2D version). At no point does it look like Jaa is “cheating” though, and it pretty clearly is him doing those badass Muay Thai moves, whether it’s when he’s using flaming shoes as weapons or swinging from a bridge by a rope around his ankle.

The film’s supporting cast includes a number of very formidable combatants whom we certainly can believe can hold their own against Jaa, including “lightning bruiser” Marrese Crump. On the not so punchy-kicky front, Petchtai Wongkamlao returns as Sergeant Mark and plays the role straighter than in the first film which definitely helps. Yanin “Jeeja” Vismitananda, star of Chocolate and Raging Phoenix, is effectively intense as one half of a tag team, though the role of “fan service provider” falls to the sexy Yayaying Rhatha Phongam, last seen opposite Ryan Gosling in Only God Forgives. 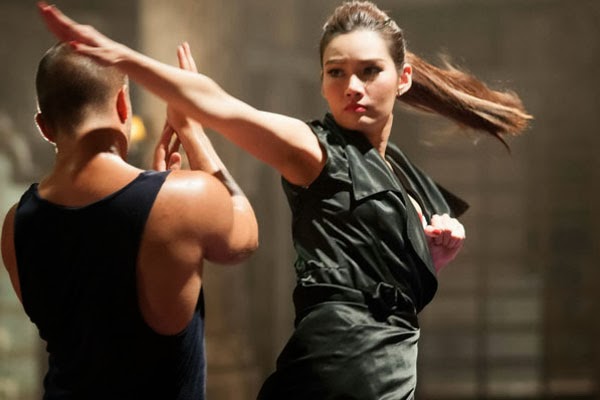 Of course, you need a big bad villain in your over-the-top martial arts picture and that role is filled here by RZA (born Robert Fitzgerald Diggs) of the Wu-Tang Clan. The hip hop artist has attempted to break into acting with The Man with the Iron Fists and a small role in GI Joe: Retaliation. He is not a great actor, but we cannot fault the guy’s passion and enthusiasm for the martial arts movie genre. He must have leapt at the chance to play the bad guy to Tony Jaa and while this is the umpteenth “underground martial arts tournament organiser” villain we’ve seen, the guy does have a good time with it. 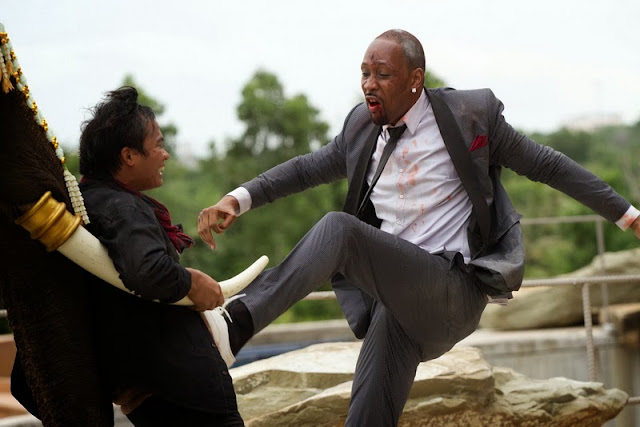 Tony Jaa is now charging into Hollywood with a role in the upcoming Fast and Furious 7. We have to wonder how he’ll work the elephants into that one. Tom Yum Goong 2 is something of an improvement over its predecessor (it doesn’t have scenes like Sergeant Mark’s superfluous tour of Chinatown) but if you’re looking for a realistic, gritty fight movie, turn away now. The clashes in this flick are as inventive and entertaining as they are pretty ridiculous, and it is in fact because they are cheesy in that exaggerated 80s kung fu flick tradition that the movie is ultimately enjoyable. Stick around during the end credits to watch a mix of behind-the-scenes footage and outtakes.

Hey everyone, Jedd here! As a collector and amateur customizer of action figures, I decided to join the Fwoosh. I'm a big DC fan, and most of my action figures are Batman, Star Wars and Indiana Jones figures. I'm a big movie buff as well, and like to write movie reviews - do check out the link above if you will. Ron very kindly appproached me to write reviews for the Fwoosh, and I'm honoured to be able to do so. Right now, I'm writing for a Singaporean film magazine, but won't forget that the Fwoosh was the first place to officially publish my reviews!
← The Walking Dead Season 4 Episode 4 Indifference
New to Blu-Ray for Nov. 12th →