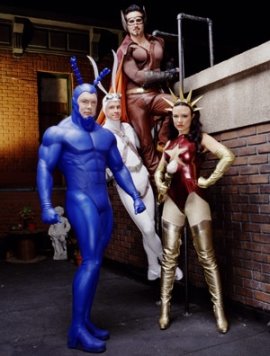 In the last installment, I talked about Wonderfalls, a great, quirky show that lasted only thirteen episodes before getting unfairly whacked. Thirteen may be an unlucky number to some shows, but others don’t even make it that far.

The live action version of The Tick debuted on showkiller Fox in November of 2001. It starred Patrick Warburton and Patrick Warburton’s incredibly recognizable voice as The Tick, a monumentally simple yet good-natured superhero. He fights crime in The City (that’s the name of the city…just The City) with the help of his friends Arthur (David Burke), Captain Liberty (Liz Vassey) and Batmanuel (Nestor Carbonell).

Where the completely enjoyable animated version of the Tick focused more on action, overt humor and sight gags, the live action Tick was written more in tune with the dry, self-aware humor of the comics, showcasing the day to day life of a man who just happened to dress up as a big blue musclehead to fight crime but remained confused by ordinary day-to-day. The writing was clever and different from pretty much anything that was on at the time—which explains why it was put to sleep. I can imagine people squinting at the television and unconsciously doing their best Warburton impression trying to figure out just what it was they were watching before changing the channel back to their comfort zone.

The Tick’s costume was excellent, and the decision was made to leave Warburton’s face bare for maximum expressiveness. Nobody does dazed and confused like him, and covering those slitted, inscrutable eyes would have been criminal. This was the perfect marriage of actor and role. The cast was completely committed to this world, and it showed in their performances, from Captain Liberty’s disgust at Batmanuel’s nonstop sexual advances and innuendos, or Arthur’s blend of plucky optimism and resolute frustration at the Tick’s Tickness.

Only 9 episodes of the Tick were filmed, and only 8 were aired. As with Wonderfalls, the episodes were aired out of order, because the people at Fox are geniuses. The intended second episode aired last on January 31st 2002, while the intended 7th episode aired November 15th 2001. Way to go Fox. And the bitch is they still haven’t learned. This column may as well be filled with shows Fox has cancelled before their time. The series received a dvd release in 2003. If you dig dry wit and quirky comedies, give it a shot.

Ibentmyman-thing spends a lot of time talking about (and sometimes to) toys, and also makes them, as seen here. If there was a tv show about his life, it would be on Fox, and would be cancelled after ten shows.